Thanks to the versatility of the Linux kernel, Debian has always been known for supporting a large number of architectures. It has also often been criticized for that as it is said to slow down the development of Debian.

Among these architectures, the ARM one was considered dead a few years ago, and some people wanted to get rid of it. Today all major distributions now have an ARM port, one of those distributions being even based on Debian. It seems Debian was right.

Now that Android has been ported to MIPS, we may see more and more MIPS based devices. Will the same scenario happen again?

A few months ago the netbase package started to install the /etc/sysctl.d/bindv6only.conf file to switch the default bindv6only value from 0 to 1.

A lot of people are not happy with this change, but it is not my goal to give my opinion here. On the other hand, people have propagated the rumour that it has been done as the FreeBSD kernel, used in the kfreebsd-amd64 and kfreebsd-i386 ports of Debian, only supports the mode corresponding to 1.

Let's give the truth:

This has been roughly one year since Debian switched from GLIBC to EGLIBC, so it's probably the time to make a small report about this change.

First of all, on the GLIBC upstream side, things has improved a bit since we now have regular stable release, thanks to Petr Baudis aka Pasky. The good point is that the stable releases are imported into the EGLIBC stable repositories.

On the EGLIBC side the switch has helped to reduce the number of patches in the Debian package (for example, resolv.conf is automatically reloaded if needed), and has brought some bug fixes and improvements, especially for the arm, mips and powerpc targets.

It should be noted that the newly created PowerPCSPE port for PowerPC e500 series CPU also benefits from EGLIBC, as it is not natively supported by GLIBC.

Thanks to the great work of Nobuhiro Iwamatsu and others, Debian has an unofficial SH4 port which is close to complete (> 90% of the packages built).

In order to help developers to fix bugs on this architecture, I have produced an SH4 QEMU image which is available at the same location as my other QEMU images.

You will need a recent GIT HEAD QEMU to use it. Previous versions suffer from bugs in the MMU, causing segfaults and gratuitous TLB flushing. The MMU emulation is now hopefully correct, but still a bit slow. Also the emulated board is limited to 64 MB of memory, and this value can't be changed as memory extension would overlap the addresses used for peripherals.

Update: I have backported the necessary SH4 patches into the QEMU Debian package version 0.12.3+dfsg-4.

Contrary to what lucas announced (I don't know where he got this info), we plan to release Squeeze with eglibc 2.11. It is already packaged in experimental and is ready on all architectures except hppa where there are a few major regressions in the testsuite to fix. This is what prevent us to upload it to unstable.

In the last weeks, I stopped being motivated to work on the eglibc package, it's not fun as it was before. Maintaining this package is taking a lot of my (free) time, and I am not anymore able to follow the bug rate, especially for RC bugs or bugs that I consider high priority. In turn it does not give me time to integrate eglibc 2.11 or other wishlist features I would have liked to see (rework of the locales* packages, using multiarch paths, etc.).

I hope it's only a bad moment and that things will change soon, so I can find time to work on GNU/kFreeBSD, QEMU or to do electronics. In any case you can help by handling bug reports or writing patches. Everything is in the BTS!

New features usually come with new versions. Before reporting a bug for a new feature, it may be a good idea to make sure you are using the latest version. apt-get can be really useful for that.

While testing EGLIBC 2.10.1 on all Debian architectures, I have discovered that the testsuite on IA-64 fails for the new POSIX 2008 math tests. I have reported the problem both upstream and on debian-ia64@lists.debian.org, but without success.

IA-64 being one of the last architecture (with HPPA) on which EGLIBC 2.10.1 fails to build from sources, I have decided to spend my day fixing the problem and digging into the corresponding IA-64 assembly code. The mathematical functions on this architecture are based on the Highly Optimized Mathematical Functions for the Intel® Itanium™ Architecture. Using the Intel® Itanium™ Architecture Software Developer's Manual and after a lot of tries, I have been able to add the missing code paths needed for POSIX 2008 compliance, and also fixed a few bugs on the stack frame allocation (arguments of the alloc instruction).

The resulting patch is now in the pkg-glibc SVN and in the upstream bugzilla.

And more important, I have learned the basic about IA-64 assembly! 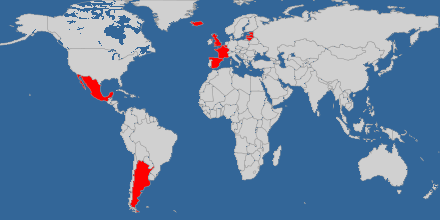 If you want to see your country coloured on the map, you can invite me for my next holidays ;-).

I'll get it signed by other Debian Developers tomorrow, during the Debian France meeting.