I have four SATA disks in a software RAID 5 array, and with my old mainboard the SATA controllers were on two PCI cards. The PCI bus was limiting the maximum transfer rate to about 60 MB/s. My new mainboard has an NForce 3 chipset, which has two SATA controllers connected directly to the HyperTransport bus, so that I can reach 158 MB/s. That's a great improvement!

I have a total of 5 hard-disks, 1 DVD-ROM drive and 1 DVD-RW drive resulting in a lot of cables and a big mess in the mini-tower box, as it could be seen on the photo below. Hopefully I now have less PCI cards as the soundcard, the SATA controllers and the ethernets controllers are now integrated on the mainboard. 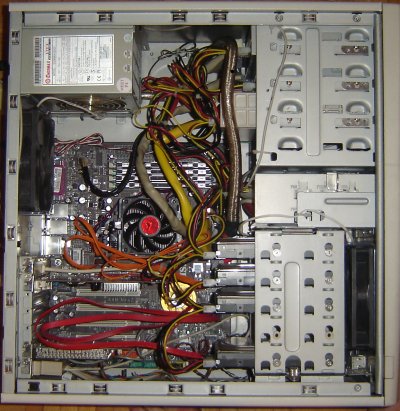 Now that the hardware is setup, I'll have to look at the software, as my computer is still running in 32-bit mode.